Galicia’s textile industry is a strategic sector, comprised of 300 businesses  employing some 13,000 people and accounting for 6.5% of the region’s GDP. Such economic weight and importance are portrayed in ‘Con–Fío en Galicia’ through several pieces which have been the key to this process. From the interactive screens used by Inditex all the way back to the first pre-Roman looms. From the  Refrey sewing machine, the first to be manufactured in Galicia, to the success of the shirt manufacturer Regojo, which with its Dalí shirts, that required no ironing, became one of the major textile producers of Galicia, with 1,200 employees and a daily production of 15,000 units. Success led the firm Regojo to engage an advertising campaign with Dalí himself, which may be witnessed at the Gaiás Centre Museum, as he publicized the virtues of this garment in exchange for a fee of 125,000 pesetas plus one peseta per each shirt sold.

Success in the textile industry is not just a thing of the past. This is proven by the company Sociedad Textil Lonia, that manages from Ourense a series of brands such as Carolina Herrera; Adolfo Domínguez, ranking third textile industry during 2013; and, of course, Inditex: a total of 6,777 stores opened in 88 markets in the year 2015 carry the name of Galicia all over the world. Ranking number one among the textile companies, Inditex is the object of studies at many business schools and academic publications. Its founder, Mr. Amancio Ortega, is the second wealthiest man in the world. This giant based in Arteixo opens up to the public at the Gaiás Centre Museum through the screens that enable visitors to get to know the production chain, its stores worldwide, and the collections that each year issue from Galicia to dress the world. 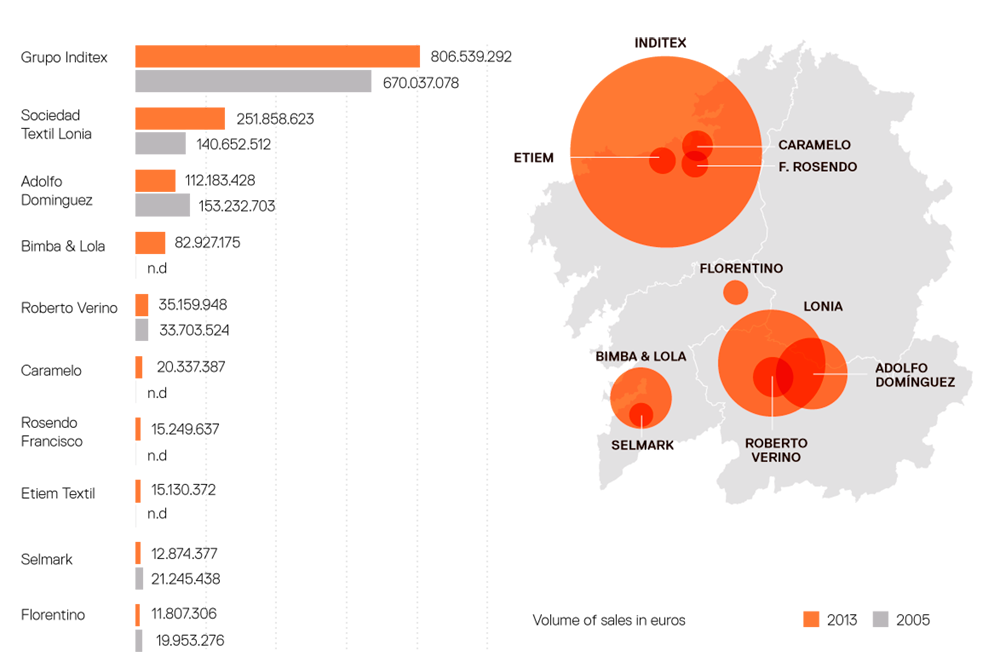